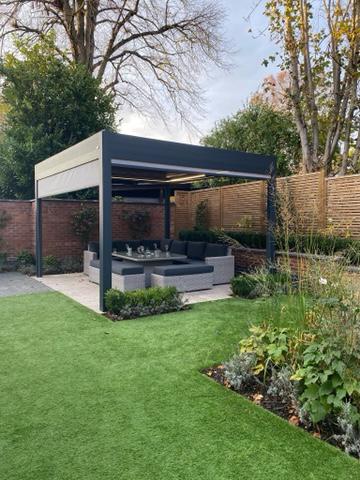 With a growing trend towards outdoor living and dining, an aluminium pergola for your garden can help to create the perfect outdoor entertaining space.

As well as providing structure and zoning, a pergola will ensure shelter from the elements, provide the perfect setting for your garden furniture and extend the al fresco dining season well into the autumn and even winter months.

Pure Pergolas can supply and fit two types of aluminium pergola for your outdoor space: Santorini and Mykonos. Each type comes with a range of options to create a completely customisable product.

A slimline, minimal aluminium pergola, Mykonos is available at sizes up to 6.2m x 4.5m and comes with a full range of customisable features. 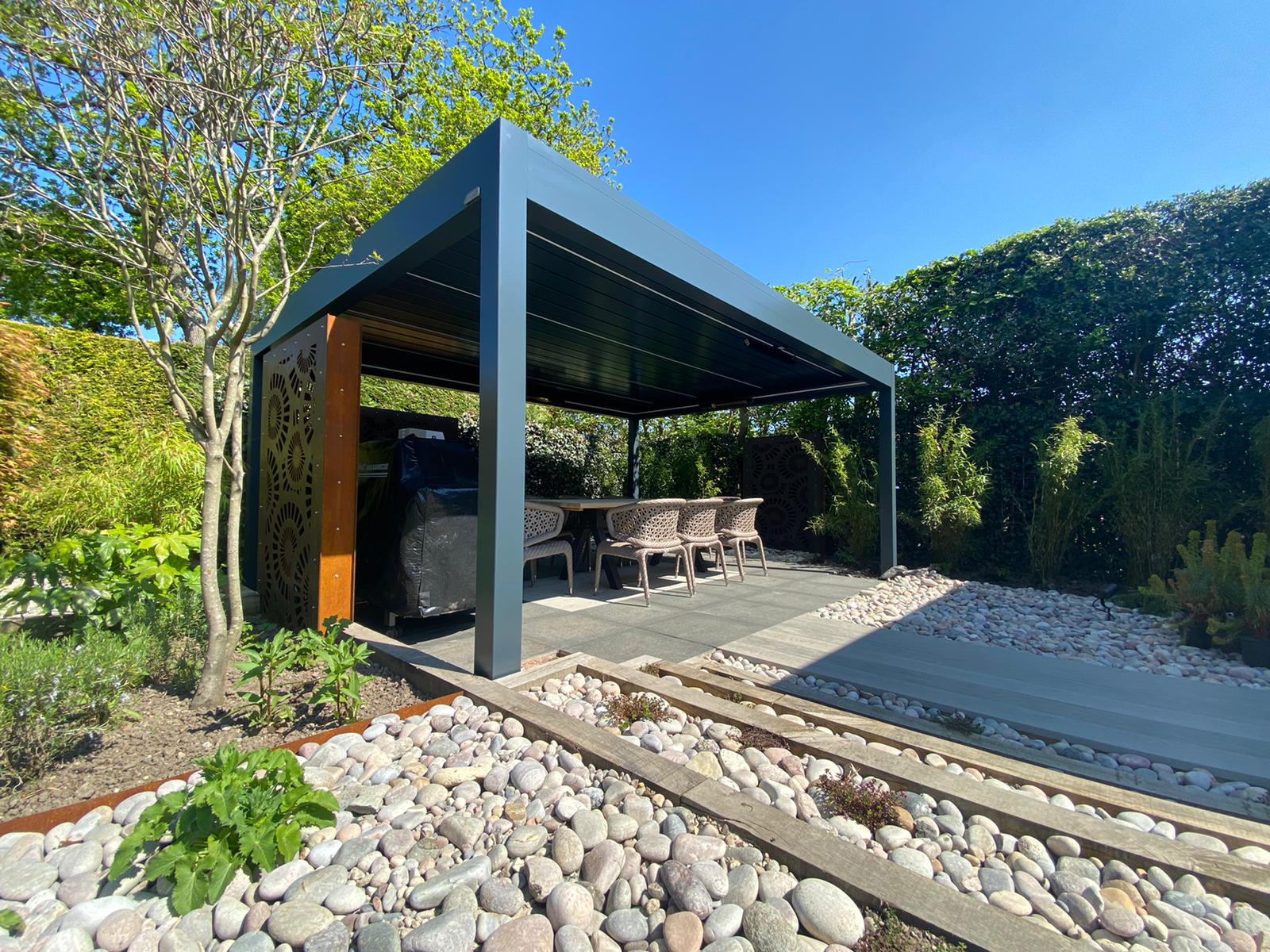 This pergola system is suitable for larger gardens or commercial applications. It can cover up to 50 sq m with just four pillars, or double that size with 6 pillars. 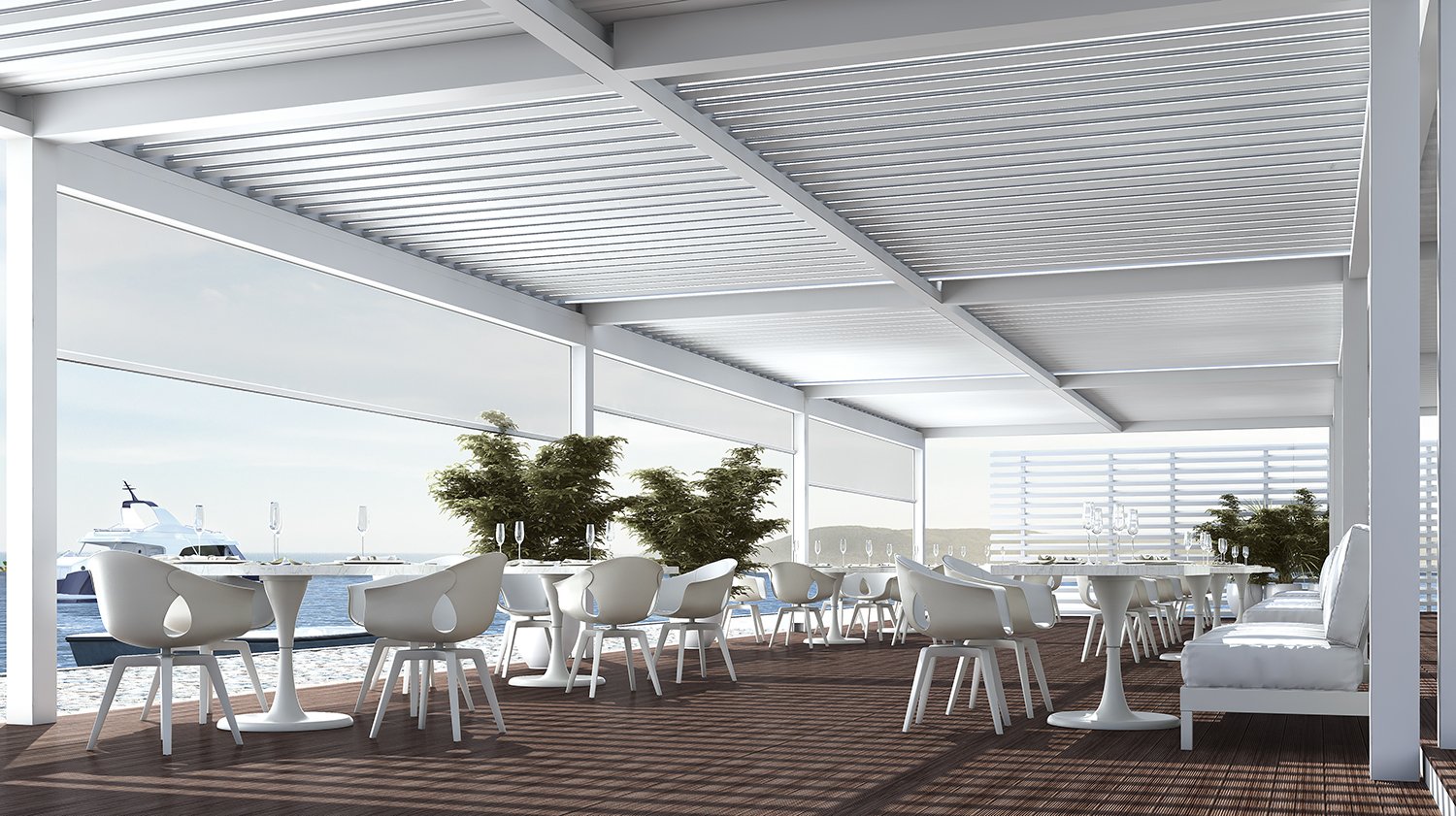 See one of our pergolas in action

This video provides a bit more detail on operation including the movement of the louvers and lighting options.

You can also take a look at our Gallery page for more images. 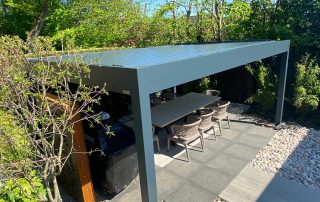 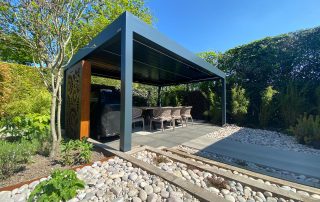 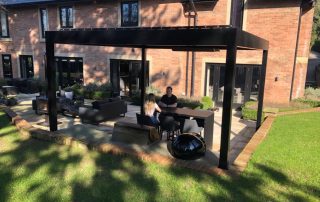 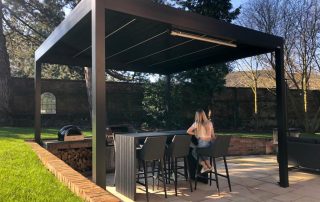 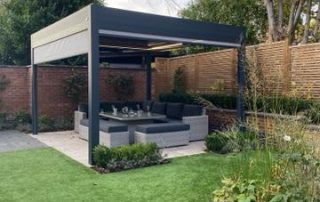 How do we work?

Drop us a email or give us a call – visit our contact page to get started.

We will come and carry out a site survey to make sure the area is suitable for pergola installation, check sizes, discuss design options and ensure electricity and drainage requirements can be met.

We will provide a quotation, product spec and payment schedule.

At acceptance of the quote and approval of the spec, a 50% deposit will be payable to secure your production and installation slot.

Our fitting team will install your pergola, after which the final 50% payment will be due.

Send us your details and we’ll be in touch to arrange a visit.

Your details won’t be shared or used for anything else.

How long will the installation take?

Depending on the specification and size of the pergola the construction time on site is between 1 and 2 days.

Will my electrical supply require upgrading?

A site inspection of the current electrical distribution board and the relation of this to the pergola will be required prior to providing an estimate for the electrical element of the works.

How does the pergola drainage work?

The water will drain from the roof via downpipes which are concealed in the legs of the pergola and discharge at the base.

Does the pergola require a level surface to be sited on?

There is room for small adjustment but the generally surface needs to be firm and level in order to secure the pergola to the ground.

How is the pergola fixed down?

The pergola is fixed down at the base of each leg via concealed fixings.

Do I need planning permission for a pergola?

Generally no, but there are certain conditions where planning permission should be acquired, examples of this are in National Parks or areas of outstanding natural beauty.

Is my garden suitable for a pergola?

Our pergolas require a flat and solid surface on which to stand. They can be free standing or fitted up to an external wall. We can assess initial suitability from photos, and may ask you to supply these before a design visit is carried out.

Do you offer a full pergola installation service?

Pure Pergolas offers a full design, supply and install service for an inclusive price. Installation includes connecting up electrical elements such as heating and lighting as appropriate.

What is the usual lead time on pergolas?

All of our metal pergolas are made to order in Europe. There is usually a lead time of 6 weeks from placing your order to installation, however we can confirm this at the time of ordering.

Why we love garden pergolas

A weather resistant pergola can extend the months of outdoor living from early spring right through to late autumn in the UK. Our garden pergolas provide shade as well as protection from rain and other incelement weather and can be customised with heating and lighting options to ensure that you really do have an extension of your living space in your garden which is usable for most of the year.

A pergola can also create a stylish focal point for your garden. Installing one over a patio or decking area creates ideal zoning for seating areas and garden furniture. Add panels and blinds and choose from a variety of paint colours to make sure that your garden pergola ties in with the aesthetics of your outdoor space.

Trends in the design of garden pergolas

The earliest pergolas were wooden pergolas. They were used generally in warmer countries for shade until the invention of pressure treated timber started to make them a more viable option for wetter, cooler countries like the UK, where they became popular for growing plants and decorating outdoor areas.

Garden pergolas have become increasingly popular, especially since 2020 when Covid generated an increased interest in and focus on outdoor living areas. Aluminium garden pergolas provide a practical alternative to wooden pergolas which have been pressure treated, providing improved longevity and weather resistance.

A pergola can be combined with an outdoor kitchen, bar area or even a hot tub to really impress your friends!

Installation of our garden pergolas

Customers sometimes ask us about pergola kits and how these compare to our products. In our experience, a pergola kit is a very different product to the pergolas which we supply and fit which are specially commissioned for your garden.

When we carry out a survey we look at the optimum design for your garden, taking into consideration existing buildings, styles and anything else you wish to incorporate such as a hot tub. Pergolas are then manufactured to order, with metal pre cut to size to suit your patio or garden.

We offer free delivery and our experienced installers will construct the pergola on site, so you can relax without having to get your tools out and battle to assemble something yourself.

Is a metal or wooden pergola best for your garden?

A wooden pergola, although usually pressure treated, will generally have a much shorter lifespan than a metal pergola. Pressure treated wood is wood that has been immersed in a liquid preservative and placed in a pressure chamber. This will transform and enhance the timber so that you get a reduced chance of rot from the usual climatic pressures that exert themselves in a garden such as rain and frost.

If you wish to grow climbing plants, for example, wisteria over the roof of your pergola, then a timber structure may be more suitable as climbing plants may impede the functioning of the roof on metal pergolas. Timber is also more suitable for creating intricate shapes such as arches, trellis or lattice work.

If you wish to house a hot tub or similar feature then you may also find that metal pergolas provide more options in terms of screening.

A pergola frame can be free standing or attached to your house or another building on one side, leaving three sides open to the rest of the garden.

Freestanding pergolas can provide shade from the sun and add style to your garden or patio area.

Pergolas need a flat and firm base on which to stand, and pressure treated decking is a great way to enhance your backyard area.

Protection for your garden furniture

Whether they are freestanding or not, the beauty of pergolas is that they can suit a wide variety of garden spaces and garden types.

Basket, rattan and timber garden furniture have become oppular in recent years as customers seek to extend their living space outside the home. As well as providing shade, the roof of a pergola can provide protection for your patio garden furniture from the elements and may save you having to shelter your items in another way.

What about climbing plants?

If you wish to have plants climbing over the roof of your pergola then we recommend that you perhaps look at a wooden pergola for your garden. A pressure treated pergola is less like an outdoor room than a metal pergola. It will still give shade and provide some degree of shelter but if you want operable louvers on the roof then climbing plants can interfere with this mechanism.

If you’ve got plenty of climbers and pressure treated timber elsewhere in your garden, however, then an aluminium pergola can provide an interesting contrast with wood and other garden textures.

Where did pergolas originate?

Pergolas are thought to have originated in Ancient Egyptian times, when they may have been used for the purpose of shading from the sun or as a style statement! They may also have been used an important tools in growing plants including figs and vines.

The Chinese were also early adopters of the wooden pergola, with typical usage in a temple garden to create shade from the sun.

The Roman usage of the pergola included decorative details and in fact, the term pergola came from the Latin ‘pergula’, which means ‘projecting eave’. The word pergola is recorded in usage as early as 1645.

The 18th and 19th centuries saw pergola usage in decline, as other garden features such as the arbour increased in popularity. With the invention of aluminium came a new dawn of pergola design, with free standing models appearing initially mainly in commercial applications and now a firm fixture in modern garden design.

In the UK, a modern pergola, incorporating panels, rotating louvers and even heating elements, has the capacity to provide an extra room in the garden.